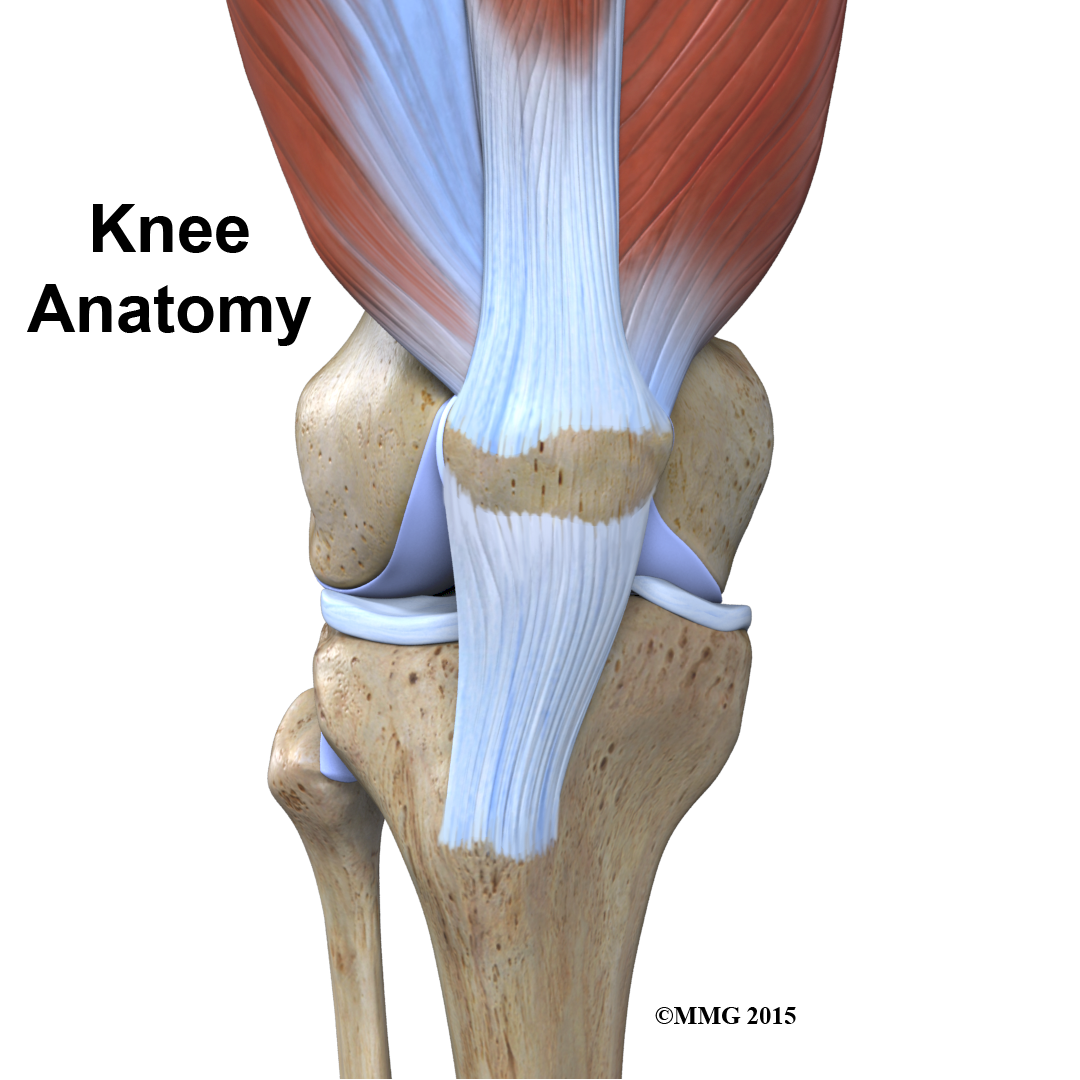 To better understand how knee problems occur, it is important to understand some of the anatomy of the knee joint and how the parts of the knee work together to maintain normal function.

First, we will define some common anatomic terms as they relate to the knee. This will make it clearer as we talk about the structures later.

Many parts of the body have duplicates. So it is common to describe parts of the body using terms that define where the part is in relation to an imaginary line drawn through the middle of the body. For example, medial means closer to the midline. So the medial side of the knee is the side that is closest to the other knee. The lateral side of the knee is the side that is away from the other knee. Structures on the medial side usually have medial as part of their name, such as the medial meniscus. The term anterior refers to the front of the knee, while the term posterior refers to the back of the knee. So the anterior cruciate ligament is in front of the posterior cruciate ligament.

This article will help you understand:

The important parts of the knee include: 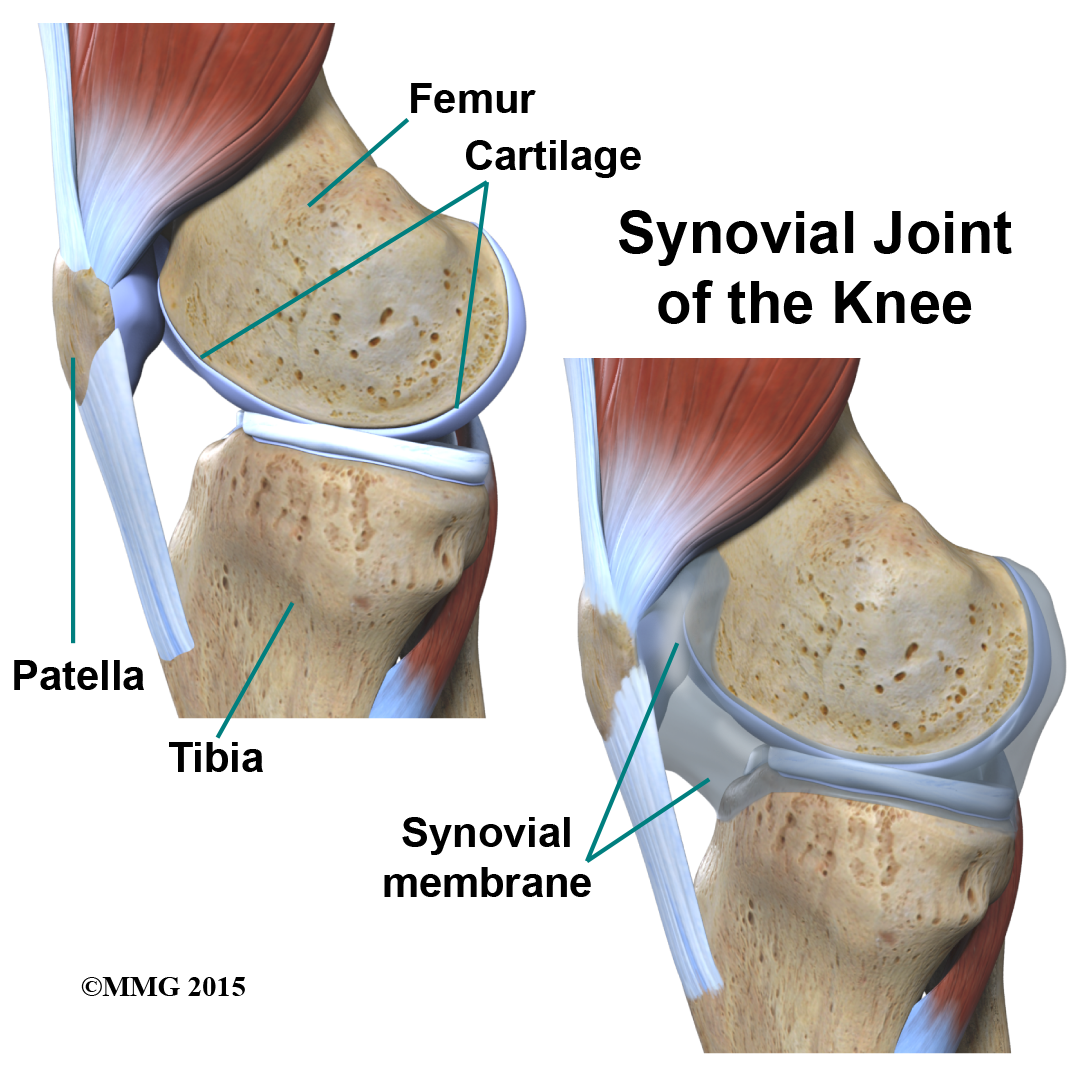 The knee is the meeting place of two important bones in the leg, the femur (the thighbone) and the tibia (the shinbone). The patella (or kneecap, as it is commonly called) is made of bone and sits in front of the knee.

The knee joint is a synovial joint. Synovial joints are enclosed by a ligament capsule and contain a fluid, called synovial fluid, that lubricates the joint.

The smaller bone of the lower leg, the fibula, never really enters the knee joint. It does have a small joint that connects it to the side of the tibia. This joint normally moves very little. 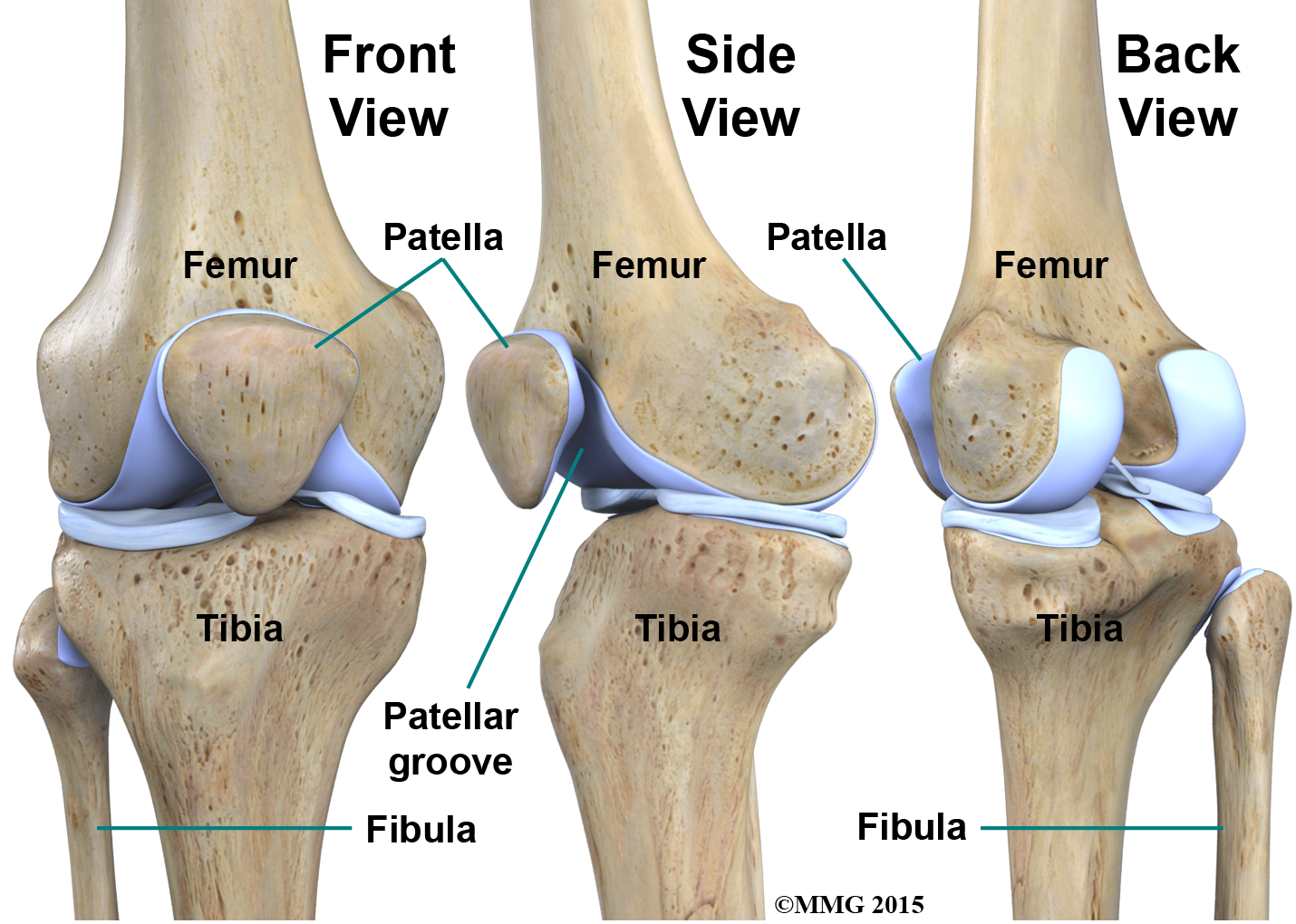 Bones and Joints of the Knee 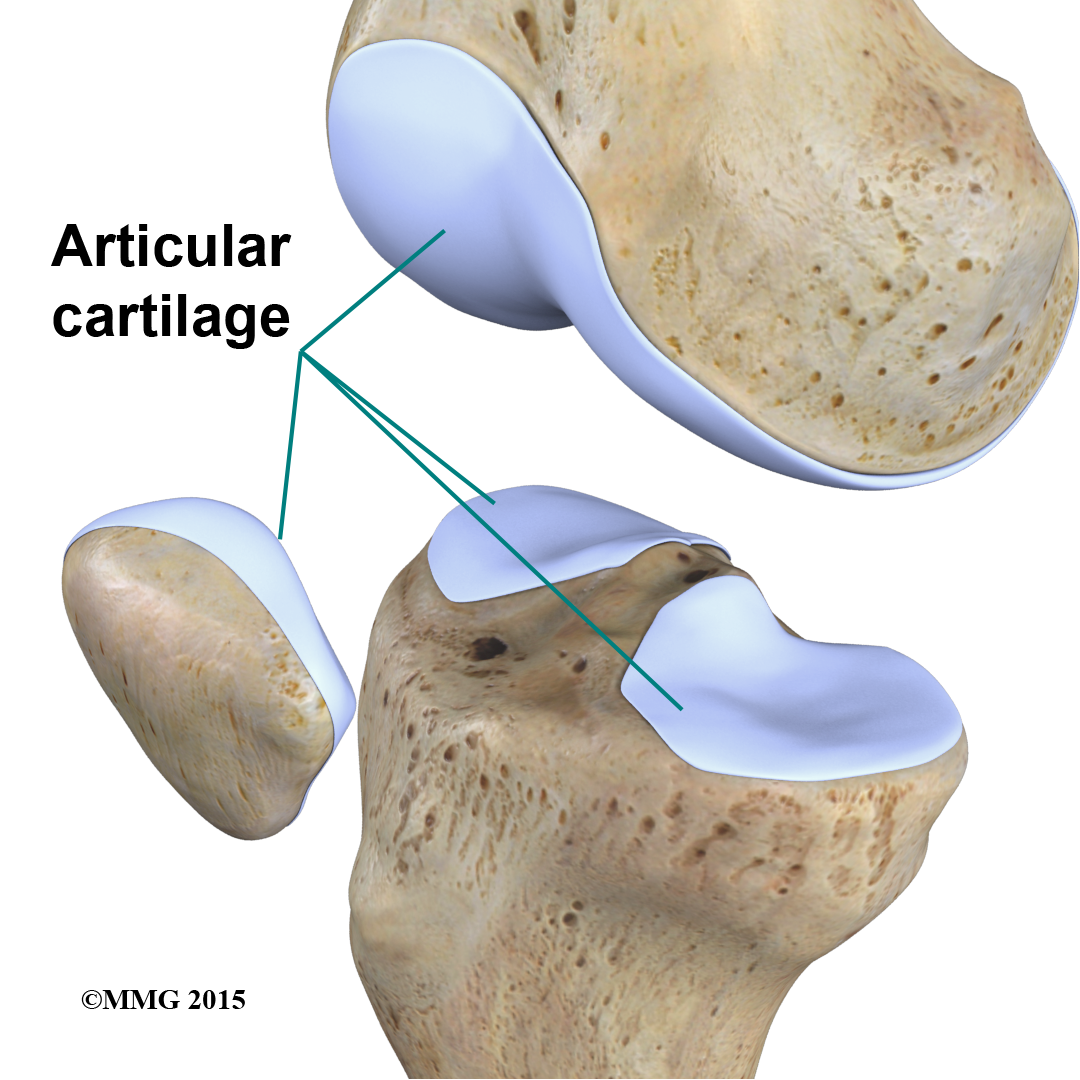 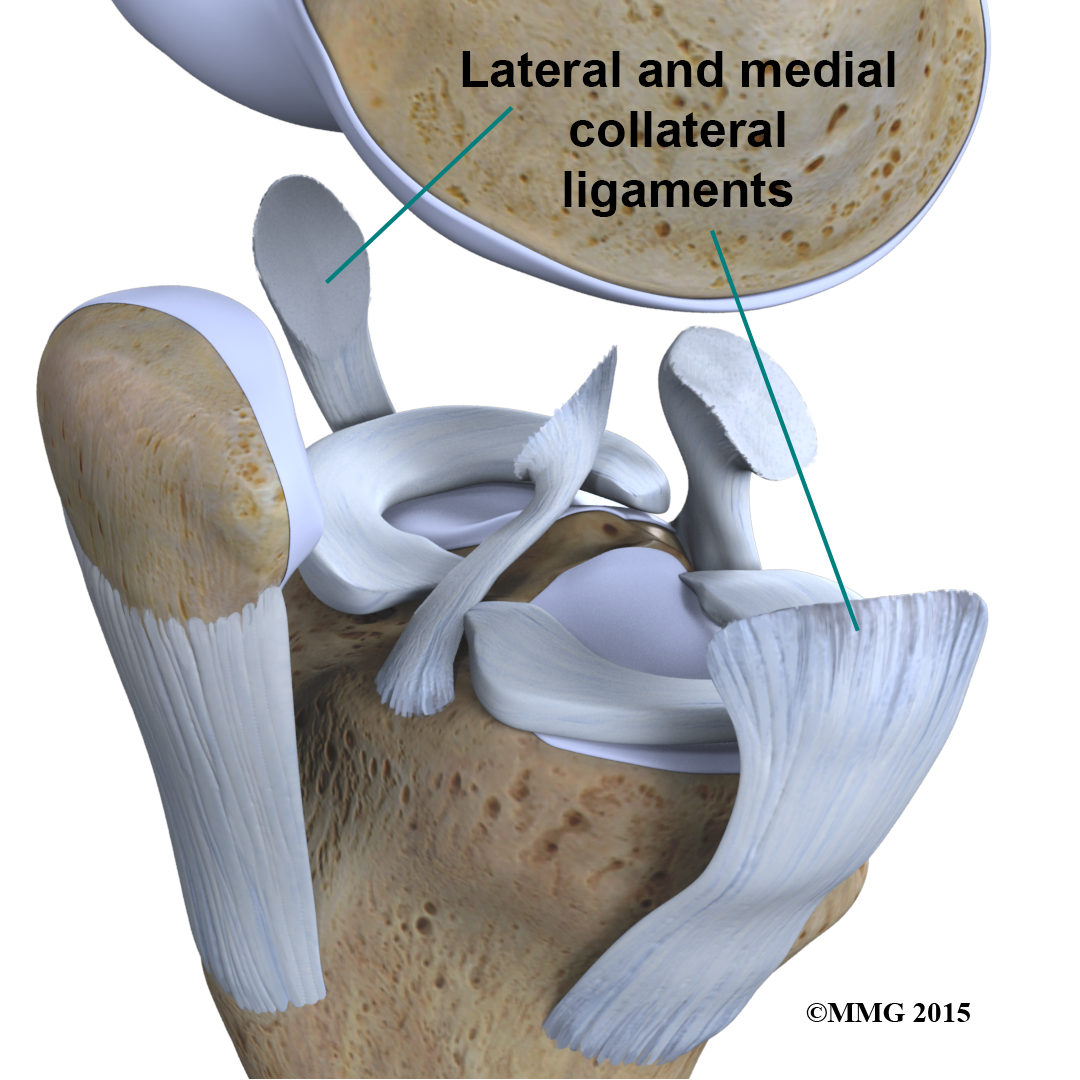 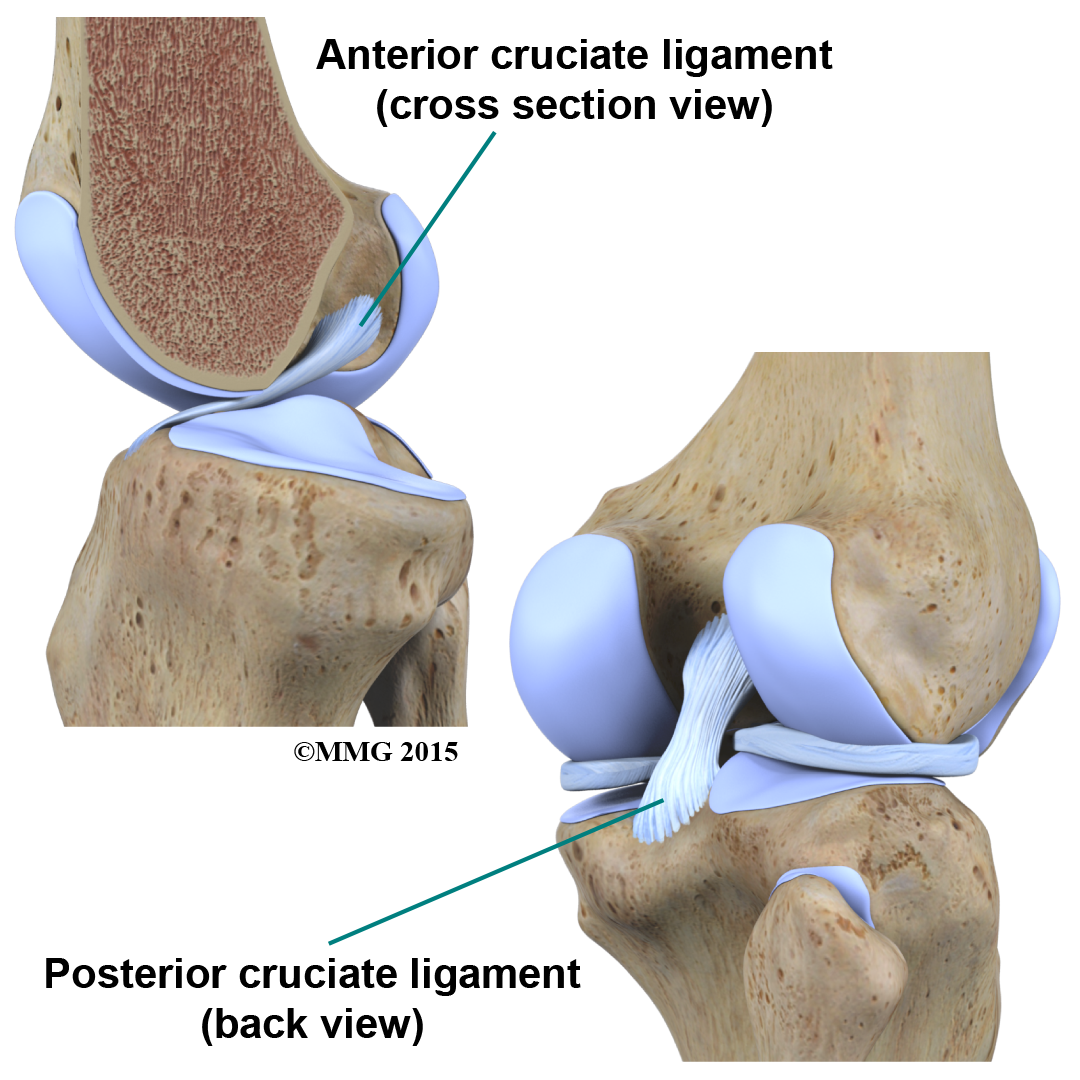 The MCL and LCL prevent the knee from moving too far in the side-to-side direction. The ACL and PCL control the front-to-back motion of the knee joint. 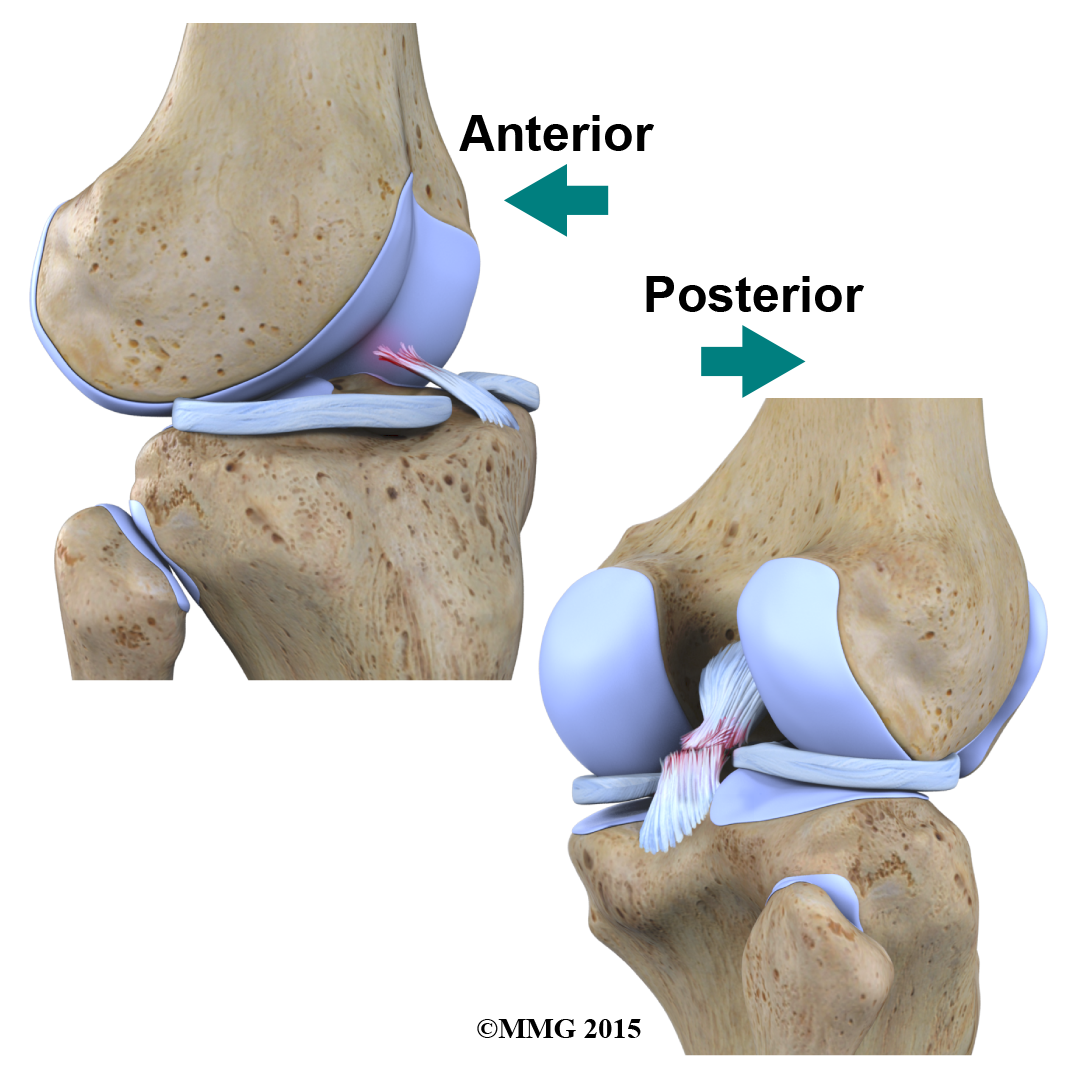 Two special types of ligaments called menisci sit between the femur and the tibia. These structures are sometimes referred to as the cartilage of the knee, but the menisci differ from the articular cartilage that covers the surface of the joint. 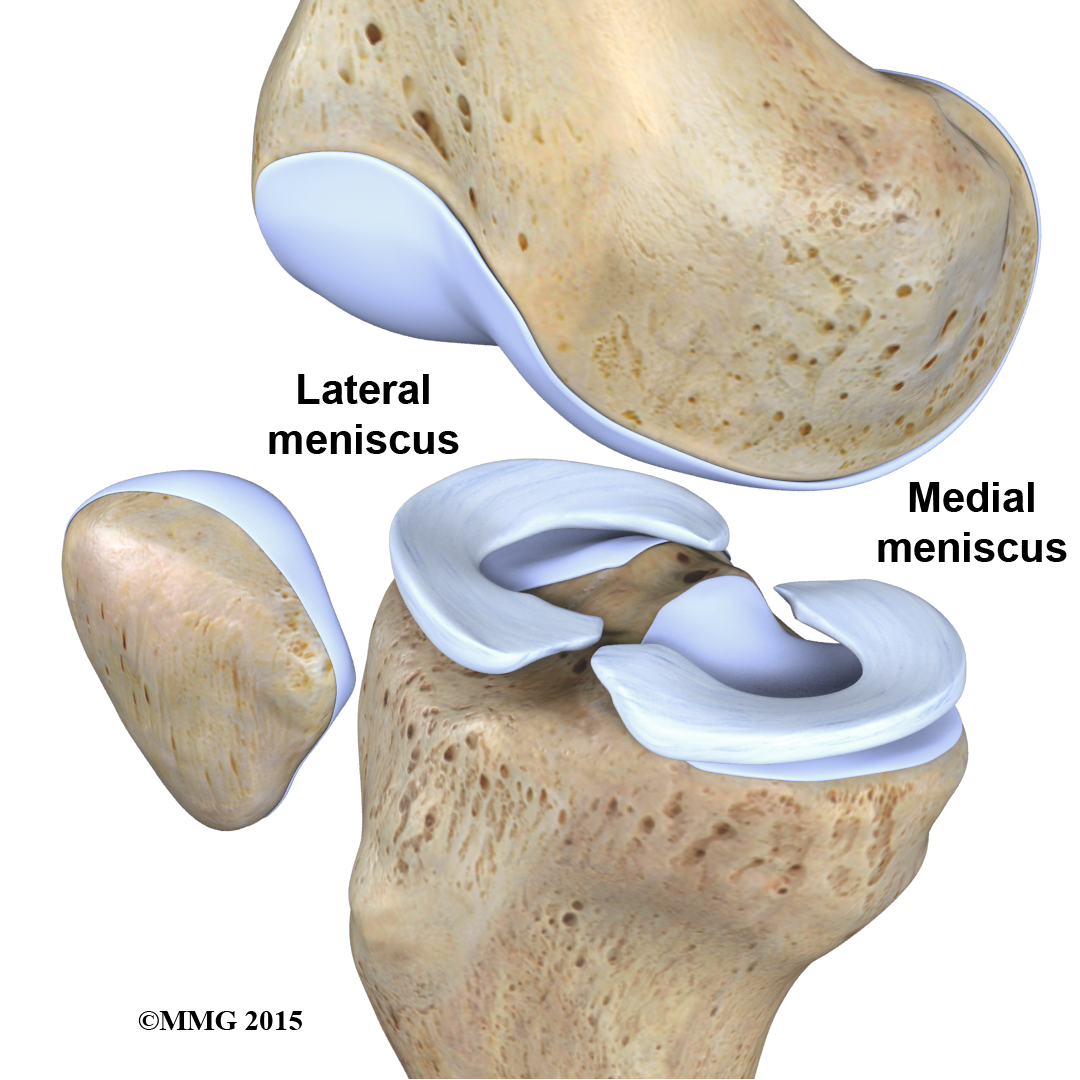 The two menisci of the knee are important for two reasons: (1) they work like a gasket to spread the force from the weight of the body over a larger area, and (2) they help the ligaments with stability of the knee.

Imagine the knee as a ball resting on a flat plate. The ball is the end of the thighbone as it enters the joint, and the plate is the top of the shinbone. The menisci actually wrap around the round end of the upper bone to fill the space between it and the flat shinbone. 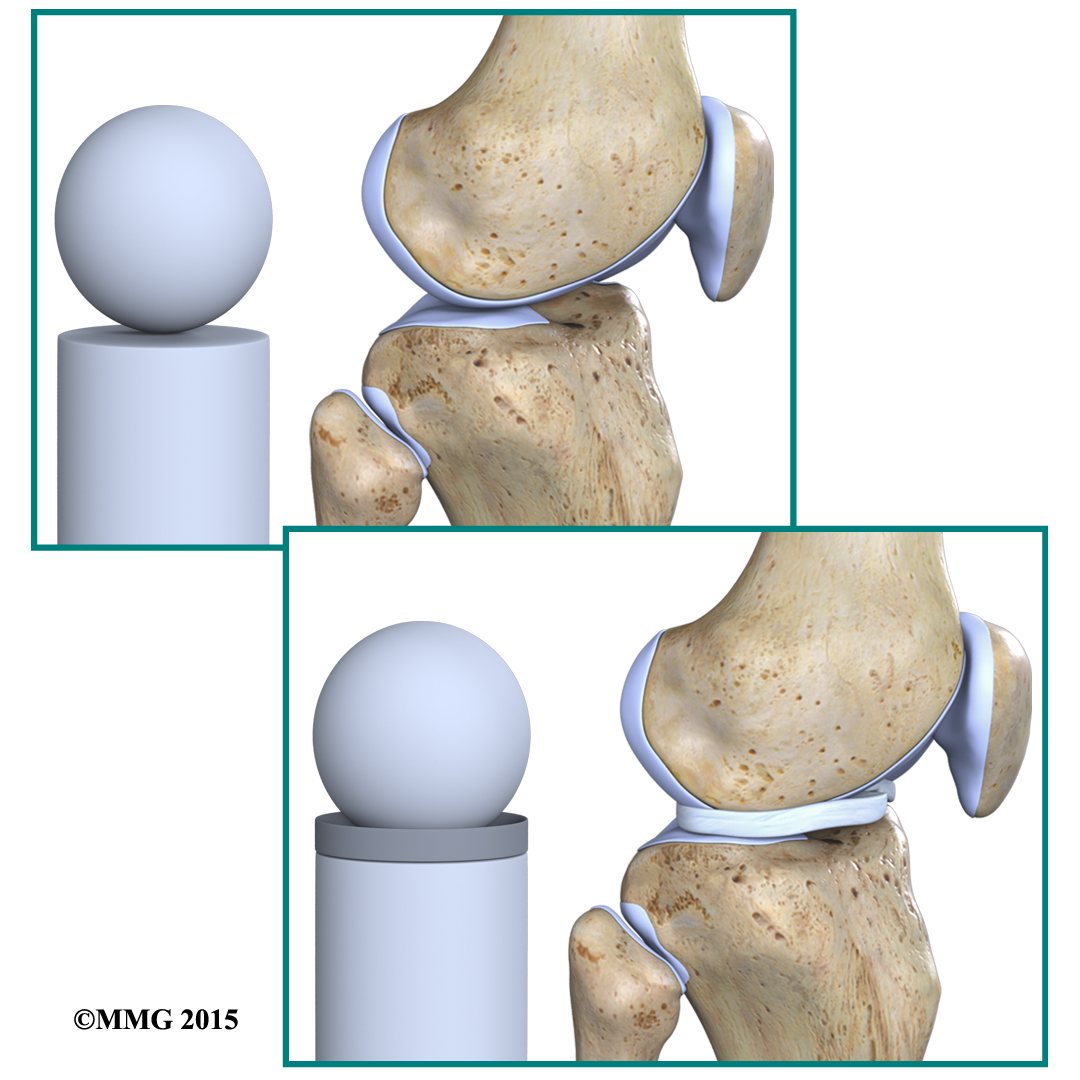 The menisci act like a gasket, helping to distribute the weight from the femur to the tibia. 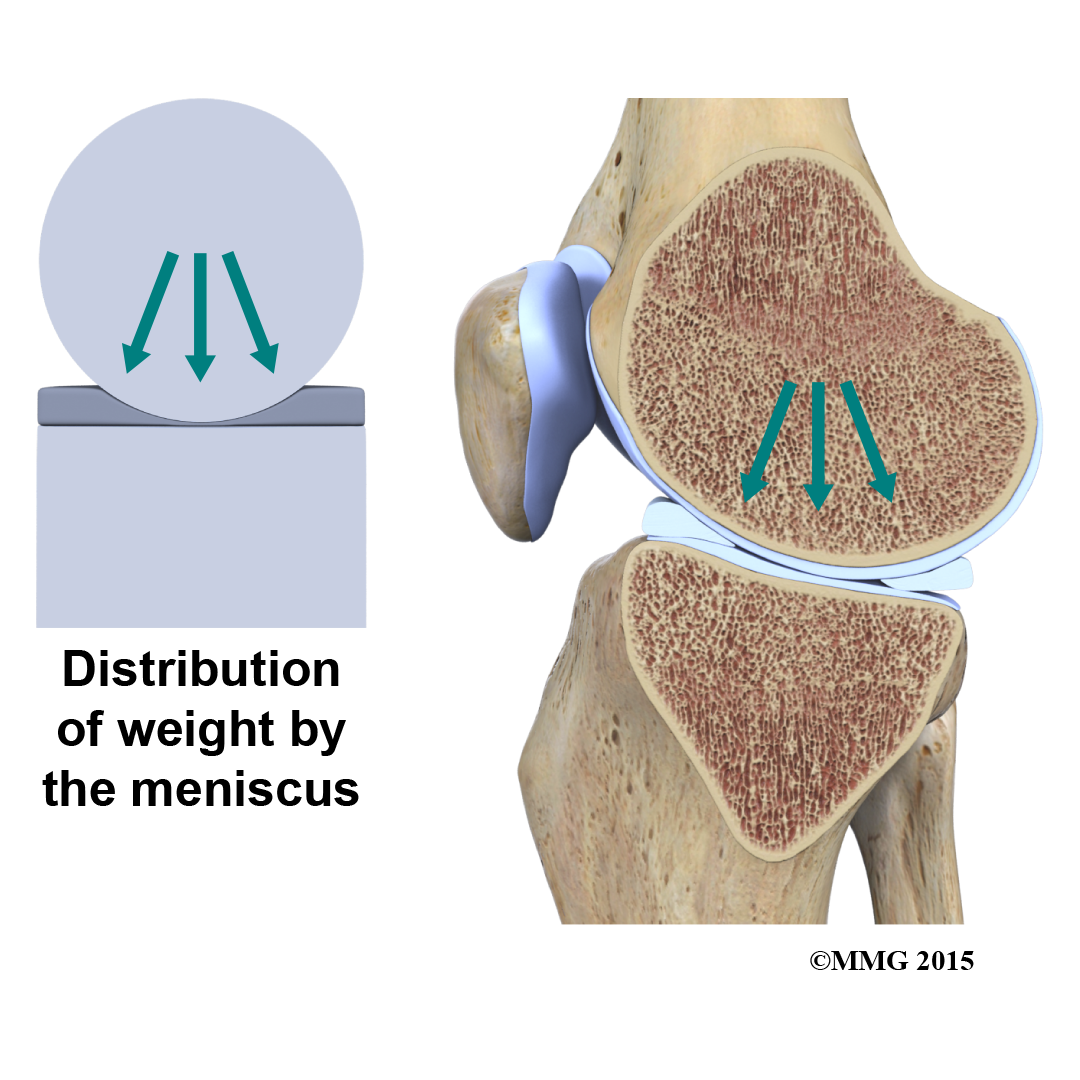 Meniscus of the Knee

In addition to protecting the articular cartilage, the menisci help the ligaments with stability of the knee. The menisci make the knee joint more stable by acting like a wedge set against the bottom of a car tire. The menisci are thicker around the outside, and this thickness helps keep the round femur from rolling on the flat tibia. The menisci convert the tibial surface into a shallow socket. A socket is more stable and more efficient at transmitting the weight from the upper body than a round ball on a flat plate. The menisci enhance the stability of the knee and protect the articular cartilage from excessive concentration of force. 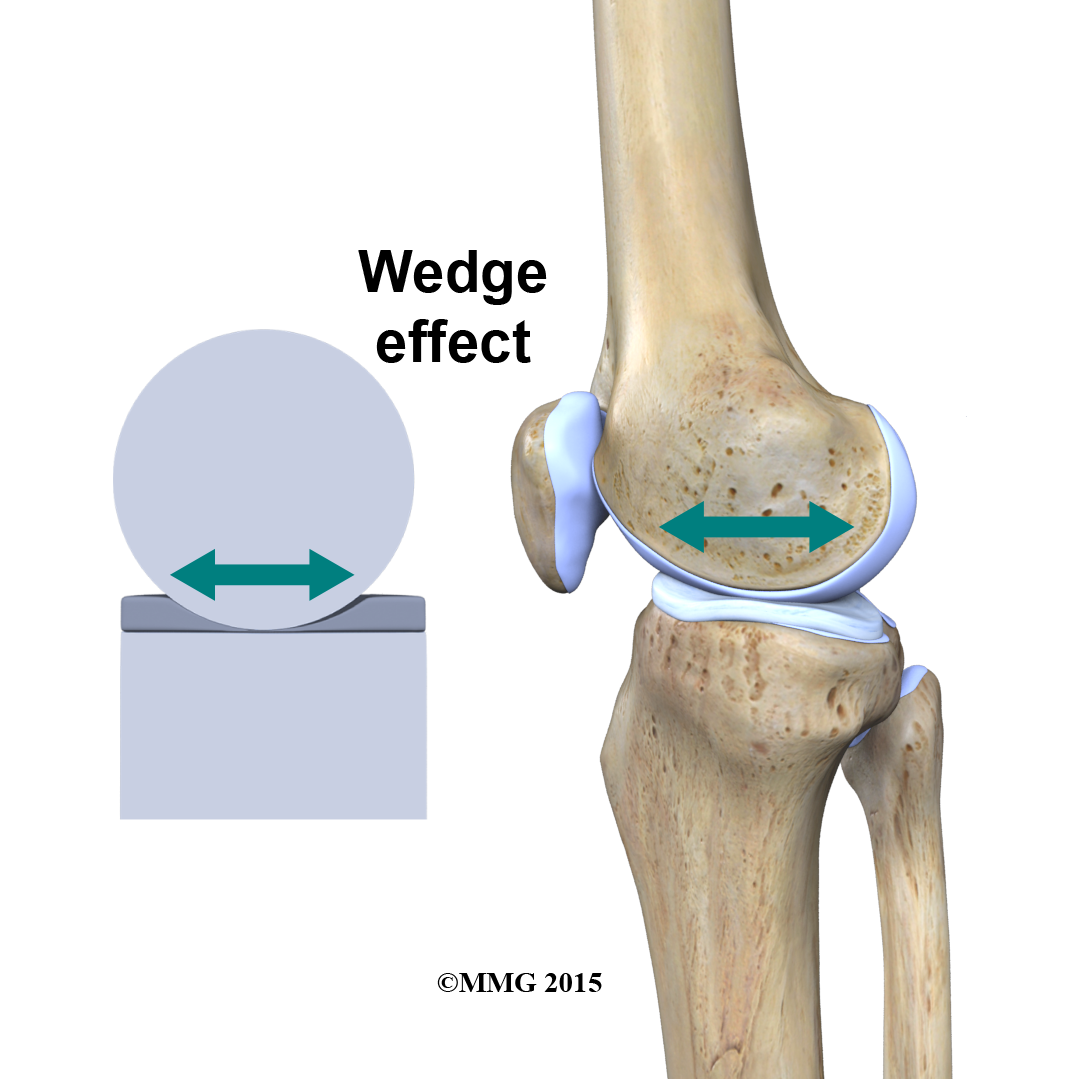 Taken all together, the ligaments of the knee are the most important structures that stabilize the joint. Remember, ligaments connect bones to bones. Without strong, tight ligaments to connect the femur to the tibia, the knee joint would be too loose. Unlike other joints in the body, the knee joint lacks a stable bony configuration. The hip joint, for example, is a ball that sits inside a deep socket. The ankle joint has a shape similar to a mortise and tenon, a way of joining wood used by craftsmen for centuries.

There it is called the quadriceps tendon since it attaches to the quadriceps muscles in the front of the thigh. The hamstring muscles on the back of the leg also have tendons that attach in different places around the knee joint. These tendons are sometimes used as tendon grafts to replace torn ligaments in the knee.

Meniscus of the Knee 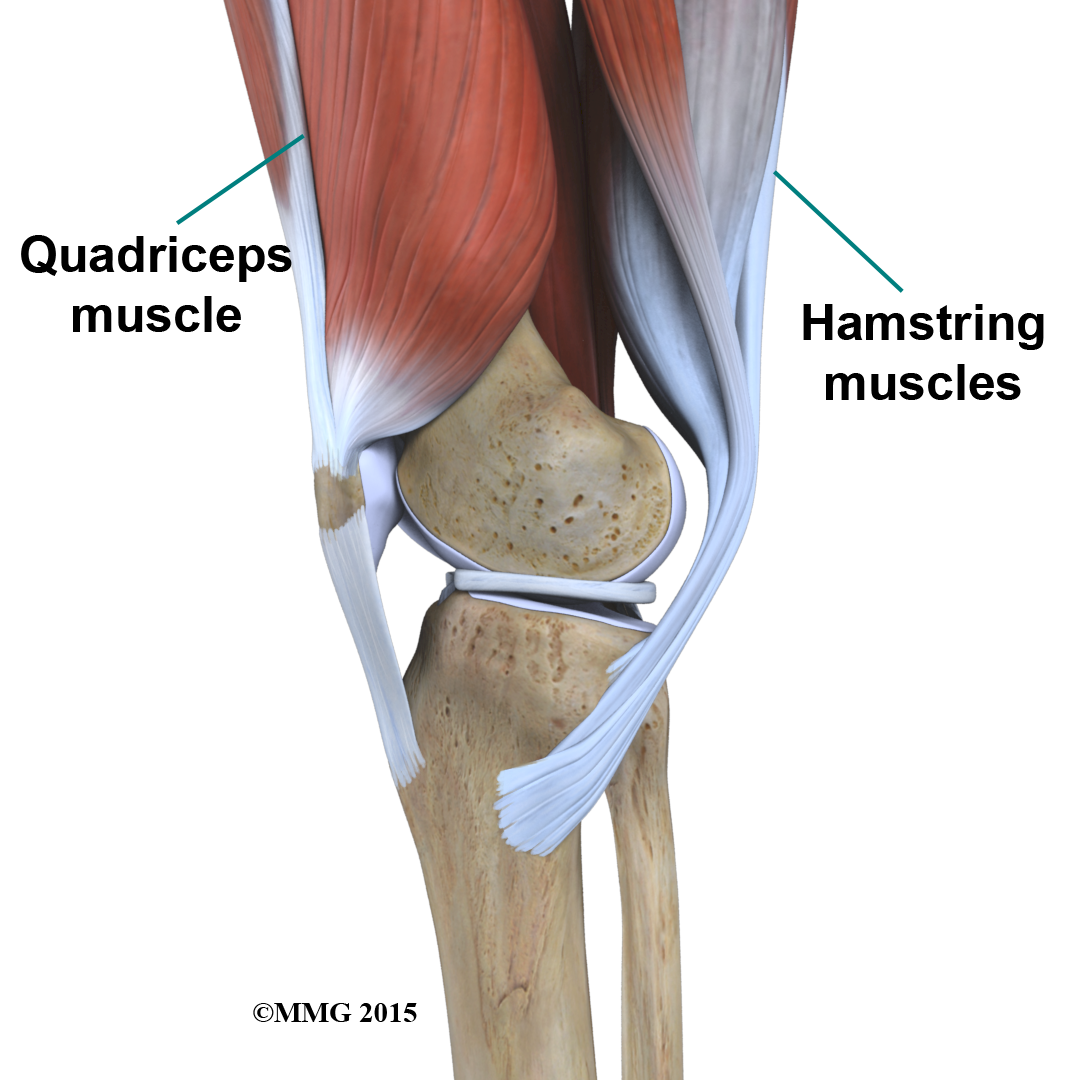 The hamstring muscles are the muscles in the back of the knee and thigh. When these muscles contract, the knee bends.

The most important nerve around the knee is the popliteal nerve in the back of the knee. This large nerve travels to the lower leg and foot, supplying sensation and muscle control. The nerve splits just above the knee to form the tibial nerve and the peroneal nerve. The tibial nerve continues down the back of the leg while the peroneal nerve travels around the outside of the knee and down the front of the leg to the foot. Both of these nerves can be damaged by injuries around the knee.

Nerves Around the Knee

Blood Vessels of the Knee

The knee has a somewhat unstable design. Yet it must support the body's full weight when standing, and much more than that during walking or running. So it's not surprising that knee problems are a fairly common complaint among people of all ages. Understanding the basic parts of the knee can help you better understand what happens when knee problems occur.